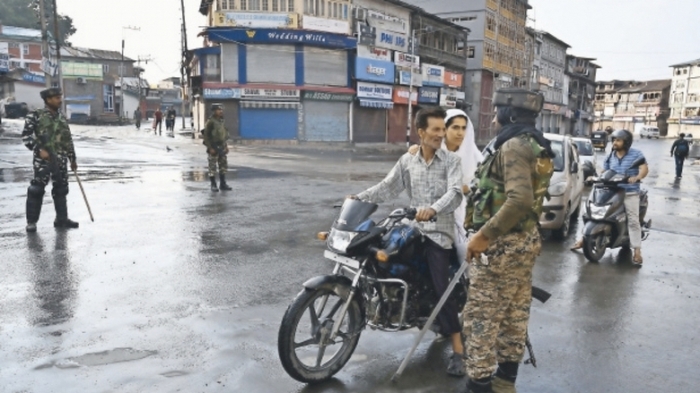 A newspaper reported that 18000 people offered namaz in Srinagar on Friday (the Jumma before Eid). The population of Srinagar as per 2011 census was around 11.8 lakhs. And one wonders why the number of people offering prayers was too low generally and secondly, why does one want it as the news headlines. Muslims offering prayers on this day in Delhi did not make it to news. Obviously, the situation is abnormal and has been created wilfully. This Eid will not be same for the people of Kashmir, as guns seem to outnumber people. There is something wrong, abnormal as the Jama Masjid of Srinagar remained closed even on the last Jumma before Eid.

Festivals are always eagerly awaited. For some like the Bengalis they literally go crazy so does the market months before Durga Puja each year. There is a lot of planning, managing the everyday during those four-five days. Festivities have their own important place in our lives. People await Diwali, Christmas or Navratra because it gives them opportunities to do what they cannot during the rest of the year. They express love towards their dear ones, be with them, remind themselves that they are part of a human society after all the alienating lives they lead throughout the year struggling to meet their everyday necessities. It is the sense of celebration that entices people apart from their religious significance. This is the reason why there is more than one Eid (which means ‘celebration’). Munshi Premchand describes the exuberance of Eid ul Fitr in his famous story Eidgah:

A full thirty days after Ramadan comes Eid. How wonderful and beautiful is the morning of Eid! The trees look greener, the field more festive, the sky has a lovely pink glow. Look at the sun! It comes up brighter and more dazzling than before to wish the world a very happy Eid. The village is agog with excitement. Everyone is up early to go to the Eidgah mosque. One finds a button missing from his shirt and is hurrying to his neighbour’s house for thread and needle. Another finds that the leather of his shoes has become hard and is running to the oil-press for oil to grease it.

There is supposed to be a sense of excitement in air for everyone – old and young, men and women. The Jumma before the Eid is an important one and like any other festivity it is expected that the families reunite and celebrate the festival. The young, impressionable minds, who would have enjoyed the day most would ask why they were denied the pleasure. Those who deny become perpetrators for those young minds and on this day they would see the troops as those perpetrators managing the mosques, the streets and markets not letting them go free, run around and engage in all kind of disobedient acts that they would have done. The discomfort at being monitored every second destroys the possibility of celebration even if officially there is a relaxation of curfew. Premchand captured how the young boys waited more for this day than others. He wrote:

The boys are more excited than the others. Some of them kept only one  fast— and that only till noon. Some didn’t even do that. But no one can deny  them the joy of going to the Eidgah. Fasting is for the grown-ups and the  aged. For the boys it is only the day of Eid. They have been talking about it  all the time. At long last the day has come.

However, the Kashmiris cannot contact their family members and or be with them. Whatever the Indian state did has denied the possibility of celebration of one of their most awaited festivals to a huge community. It has taken away the basic right that any individual wants – be with their family, celebrate with freedom the festivities and enjoy the day that the children, youth, old, men and women await so eagerly.

The Human Pain and Suffering and Insensitivity of Our Times

What surprises is that the people in rest of India are more driven by what the Indian state has done and less concerned with the sufferings of other humans. Would it have been a normal, acceptable situation if people were denied celebration of Diwali or Durga Puja in Delhi or Calcutta? It would have created a havoc as media would have ran campaigns to show how people were denied of even their basic human desires of celebration, meet their families and share the joys with others. Media houses move their microphones across different locations asking people what they think about the abrogation of Article 370. People respond with a predominantly positive feeling about abrogation. Newspapers do not even mention that there are protests and that there is huge discomfort that people are experiencing at being denied the normalcy of leading their everyday lives. Rather, there are WhatsApp messages now celebrating the possibility of buying land in Kashmir or showing a saffron image of an Akhand Bharat. The political patriarchs are joking about the Kashmiri women. What all of them, from the people on the streets to the political patriarchs, miss is the pain and suffering of Kashmiri people and forget that those pains are same for everyone whether it happens in Delhi or Srinagar and Kargil.

One of the hallmarks of what has happened in last five-six years has been the intensification of a dehumanising ethos. We do not get perturbed when someone is lynched, when mass crimes of rape and physical violence happens against particular communities, when food censor happens for the majority simply because they like to eat non-vegetarian food during the whole year. The protests or solidarity meetings that happen against lynching or against atrocities on tribal and intellectuals are attended by very few people. Increasingly, the feeling of empathy has replaced with mechanical world of try to guard one’s own interests and if any act that does not remotely appears connected with these interests one lets it go. On the other hand, the media (social and electronic alike) manages to create a consensus about what is one’s interest. This process has led to insensitivity towards the others who are made to suffer.

The most obscene manifestation of this will be when Kashmiri people won’t be celebrating Eid and the rest of India will be indifferent to them watching and re-watching Indian Oil sponsored display of masculinity with Bear Grylls in evening. 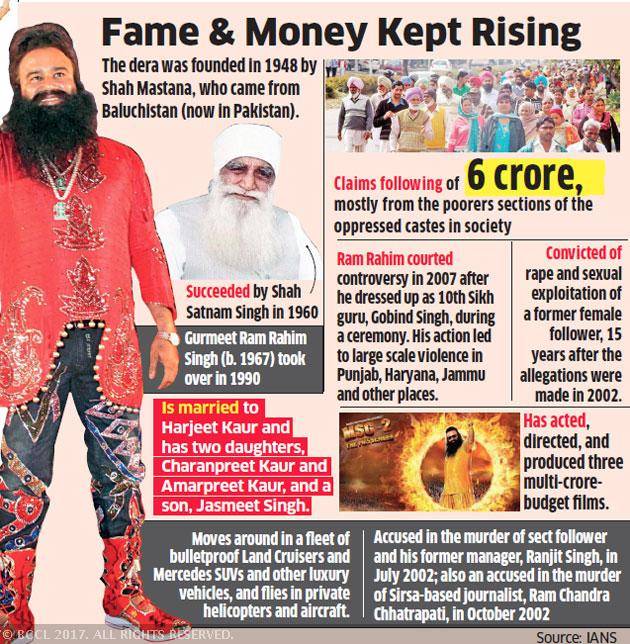 The Failure of the Haryana Government

Why the Haryana government failed to ensure that the violence that Panchkula and Sirsa witnessed is more than merely a law and order question because law and order is as much a political as social question. As pointed out by courts despite section 144 thousands of supported marched into the city whereas we know that the few hundred workers trying to hold a meeting in the Honda compound were beaten up mercilessly and very often smaller sized marches by workers and civil society are repressed with utmost efficacy. In other words, the thousands who marched inside the city were allowed by the administration to sneak in knowing from past experiences of violence involving Rampal or much later the Jat reservation agitation unless Haryana government admits its inability to handle such incidents.

The administrative machinery has been lenient towards Dera Sacha Sauda because he has been providing them a vote bank. It was way back in 2014 that the Dera supported the BJP in Haryana and asked its supporters to vote for them. The BJP leaders even sought his blessings. The BJP and Shiromani Akali Dal (Badal) also found his support in Delhi elections in 2015. The pictures of Haryana Chief Minister and leaders like Kailash Vijayvargiya also pointed to the relationship that the present government had with him. In fact, the education minister of the state, Ram Bilas Sharma, defended the march of Dera supporters to Panchkula on grounds that the Dera supporters are peace loving. He, in fact, had donated Rs 51 lakh to the Dera recently. Anil Vij, the senior Minister of the Haryana government had given Dera Rs.50 lakh from his discretionary funds for promoting sports. Manish Grover, another Minister did lag behind and gave his some money from his discretionary fund. In other words, if the political party running the state has such a close relationship with the Dera it was impossible for the law and order machinery to act against them. The administration could only maintain the appearance of being on guard while allowing the mob build up in the otherwise quiet township.

Once this money combines with the political connections it produces an extremely corrupt and deviational religious entity. A process of militarisation of such sects also start as we saw in case of Rampal and now in case of Ram Rahim, who is also one of the 36 people in India to get a VVIP status and Z level security. While such personalities must be held liable for their acts the political formations, which help them in building an empire based on sheer lumpenism and violence waiting beneath the appearance of quietude and solidarity, must also be held liable.

BJP has a history of its leaders coming out openly in support of chargesheeted godmen such as Uma Bharti’s defence of Asaram Bapu in 2013. Their understanding of women’s position was also clear when their leaders remarked that they must remain within their laxman rekha or that they must not wear jeans, etc. The events of August 25 are more or less a repetition of the same understanding within the party. With over twenty people killed in the first few hours after the judgement, the statement of the Haryana Chief Minister that some miscreants had infiltrated the followers was still an act of trying to save the Dera leader from further humiliation. Thankfully, the Punjab and Haryana High Court has been extremely proactive and ordered that all his properties be attached. Even in such a moment apart from the milder reaction of the Haryana Chief Minister the vocal BJP leader Sakshi Maharaj stood for the convicted godman. He not only put the onus of violence on the Court, which convicted Ram Rahim, but also indirectly meant that he should not have been convicted. His conviction appears to be an attack on India’s culture to the Member of Parliament.

The MP asks as to why was the voice of one person (meaning the complainant) given so much of importance when crores stand with him. The ramification of such a defence is also that the complaint filed by a woman in this highly patriarchal society should not be given as much as importance as the larger (patriarchal) society itself. Hence, let the oppression continue because it hurts the perpetrators. Now the question also remains that why does BJP and its progressive Beti Bachao Beti Padao rhetoric has space for such voices and such politics to coexist within itself. It may not be a rocket science to answer this question given the history ad politics of the Right but it needs to be answered by the ruling party in light of all its rhetorics and even other formations who have been patronising this phenomena as why would noboy came in defence of the women who for so long stuck to their complaints when powerful politician and officials were trying to pressurise the CBI official to drop the case.

What also needs to be understood is how such a huge following from the poor, marginalised section of society gets attracted towards such sects. It is more than the charisma of the person – it is also the larger political economy within this needs ot be located.